You are here: Home / Environment / Council Members weigh in on the Governor’s $10.4 Million Initiative to Improve Water Quality 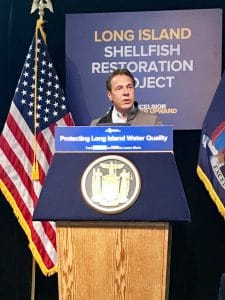 Governor Andrew M. Cuomo announced a $10.4 million effort to improve Long Island’s water quality and bolster the economies and resiliency of coastal communities by restoring native shellfish populations. New York State is establishing five new shellfish sanctuaries, no-harvest areas to allow shellfish to filter out algae before its becomes a toxic bloom and to reproduce and rejuvenate shellfish populations. The sanctuaries will be strategically located and managed by SUNY Stony Brook and Cornell Cooperative Extension in partnership with municipalities and volunteer organizations. Suffolk County sanctuaries will include portions of Bellport Bay, Shinnecock Bay, and Huntington Harbor. Nassau County sites include parts of Hempstead and South Oyster bays.

Up to 179 million shellfish will be grown in Long Island’s hatcheries and seeded in each of the selected waterbodies over the next two years – enough shellfish to filter the water in these areas every three days. Shellfish planted in each of these areas will include a mix of adult and juvenile clams and oysters. The sites will be monitored to assess survival, growth, and reproduction and to gauge the effort’s success and guide future seeding initiatives. The Governor’s announcement also included funding to allow Long Island’s existing hatcheries to expand their seed production to meet the needs of this ambitious program.

In the Governor’s official press release members of the Council weighed in on the program.

John D. Cameron, Chairman, Long Island Regional Planning Council, said, “Governor Cuomo should be commended for his recognition of the economic and environmental importance of the shellfishing industry here on Long Island and its critical role in the fight against nitrogen pollution in the Island’s marine ecosystem.”

Town of Oyster Bay Supervisor Joseph S. Saladino said, “Investing in the preservation of Long Island’s water quality today is vital to securing a clean and vibrant future for the region’s coastal economies and native species. By establishing these sites, we can help restore the shellfish population along Long Island’s coast while spurring the economy and protecting the Long Island Sound for future generations of New Yorkers. Governor Cuomo’s commitment to investing in water quality in Long Island and beyond is critical to securing a healthier and more prosperous New York for all.”

Hempstead Town Supervisor Anthony J. Santino said, “For years, the water surrounding Long Island has declined in quality, resulting in a serious decline in native sea life. By restoring the native shellfish populations and establishing sanctuary sites for these species along Nassau and Suffolk County coasts, we take a major step in improving water quality along these shores for our children and children’s children to enjoy. I thank Governor Cuomo for this major investment in our region’s water quality, and look forward to seeing Long Island’s local economies thrive.”

Access the complete press release and video from the announcement here: Press Release