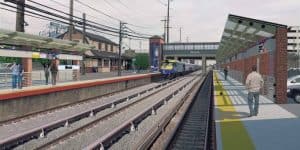 The Long Island Regional Planning Council has expressed its support for the LIRR Enhancement Project, including construction of a “third track” to be added along the existing two tracks of the Main Line between Floral Park and Hicksville.

The project would help modernize and add capacity to the system to relieve bottlenecks that have impacted the reliability of this critical transportation infrastructure. Addition of a third track, along with station and signal upgrades, the elimination of seven grade crossings, the construction of six new parking structures providing 2,300 spaces, and other improvements are vital advances that can benefit the region’s economy, job market, and home values.

The two existing tracks along the project’s 9.8-mile route were constructed in 1844, when the population of Long Island was 50,000 Over 170 years later the population is three million and four branches of the railroad now converge on the project path. This creates an extreme bottleneck that chokes the system, severely constraining its expansion and modernization and turning it into a one-way street during peak service hours. More importantly, it prevents the transit-oriented economic and community development that is essential if Long Island is to be competitive in a 21st-century economy and attractive to young people we want to live and work here.

In this era of tight budgets, a commitment of $26 billion dollars for infrastructure is a historic opportunity.
A recent Newsday editorial summed up the issue, saying, “The approval of the third track shows us that Long Island is able to think and act in big ways, to plan for our future, to help shape a new region that can meet its challenges.”