You are here: Home / Environment / Planning for Storm Surges Essential to Protect Coast 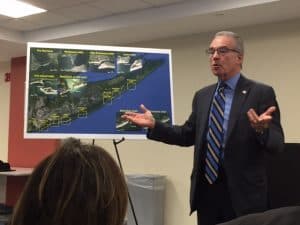 More than eight million people in the New York Metropolitan area are located in areas at risk of coastal flooding and almost 60 percent of its land area is within a meter of sea level, he said.

Dr. Bowman, Distinguished Professor of Physical Oceanography at Stony Brook University, and Chairman of the Metro NY/NJ Storm Surge Working Group, said the storm surge threat is compounded by rising sea levels. Methods of predicting and pinpointing storm surges, as well as proactive protection of vulnerable coastal areas, must be immediate priorities. He asserted that with bigger storms, we need to build storm surge barriers to save our region.

Dr. Bowman described his site visits to other cities, such as London, which began using underwater barriers in 1982, and the Netherlands, which following a storm in 1953, built a barrier system with a swinging gate that closes off vulnerable inlets in the event of a big storm. Other cities with barrier systems are St. Petersburg, Russia, and Venice, Italy, which has a hinge on the sea floor that swings up during storm surge.