You are here: Home / In the News / Dinosaur or Dynamo? The Future of Long Island Retail

‘Malls will become towns in themselves,’ developer says of LI’s future 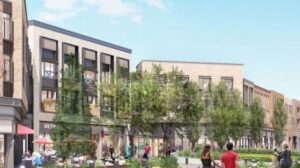 A rendering of the proposed mixed-use Heritage Village project that would be built on the site of the former Sears department store in Hicksville. Credit: S9 Architecture

Long Island retail needs to take bold steps to adapt and address vacancy issues that began before the COVID-19 pandemic hit this year, according to panelists at a Long Island Regional Planning Council meeting Wednesday.

“And they should have residential, work, dining in an enclosed or more finite location. And I do think it is more palatable to have mixed-use to include residential rather than having residential elsewhere,” he said during the Zoom meeting.

Cohen was among the developers, county planning officials and others who discussed Long Island’s rising number of retail vacancies, particularly at shopping malls, and how simplifying difficult rezoning rules, adding a mix of multifamily housing and small retail, and other means could be used to fill empty spaces.

Brick-and-mortar retail, especially department and clothing stores, already was struggling with online competition well before the pandemic hit the United States in February.

Like other areas across the country, Long Island retail was hit hard by the pandemic, during which nonessential businesses were state-mandated to close for months, starting in March, to help stop the spread of the virus.

To fill vacant spaces before the pandemic, many retail landlords had courted movie theaters, restaurants, gyms, entertainment centers, such as Dave & Buster’s, and other experiential tenants that weren’t susceptible to online competition.

“What has been kind of the irony of COVID … is the subsector of retail that got hit the hardest was experiential,” said Larry Rose, principal of The Rose Group, a Westchester-based developer and development advisory firm.

Rose’s firm is advising Seritage Growth Properties, a Manhattan-based real estate investment trust that was spun off from Sears Holdings Corp. in 2015, in its proposal to redevelop a former Sears property in Hicksville into a project called Heritage Village. If approved by the town of Oyster Bay, Heritage Village would have 425 apartments, as well as retail and office space, a movie theater, grocery store and parking on the 26.4-acre site.

(Residents who oppose the plan have raised concerns about traffic, while proponents have said they would welcome the boost to the economy.)

Blumenfeld Development Group, which owns retail properties on Long Island and in New York City, Connecticut and Florida, is mostly stable, but there have been tenant challenges since the pandemic began, Cohen said.

“Movie theaters, gyms and restaurants have hit us the hardest. … They represent probably in aggregate about 10% of our portfolio,” he said in an interview after the Zoom call.

One result of the pandemic that he expects to continue is restaurant tenants shifting more of their business to a takeout model, he said.

Malls’ anchor stores are not dead, but their vacancies create the opportunity for other uses, such as multifamily housing, industrial or office uses, Rose said.

In many cases, at malls built from the 1950s through the 1970s, the anchor stores are actually owned by the retailers, such as Sears and J.C. Penney, and there is tremendous value in those properties, he said.

Furthermore, what has traditionally been known as the mall anchors – the department stores that were the main draws – has shifted to some of the smaller shops in the interior of the mall, such as Apple stores, he said.

Rose also expects more mall owners to better use open retail space for outdoor seating and sidewalks in the future.