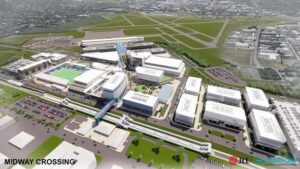 Renderings of the proposed Midway Crossing development in Ronkonkoma that would include a health science center, convention center, 300-room hotel and sports complex. Credit: JLL/Crawford Architects

By Carl MacGowan and Brinley Hineman

The $2.8 billion Midway Crossing development in Ronkonkoma would modernize the Long Island economy while bringing high-paying jobs to Suffolk County and paving the way for expansion of Long Island MacArthur Airport, the project’s developers said Thursday.

“It’s billions of dollars of annual stimulus,” JLL vice chairman Derek Trulson said during a presentation to the Long Island Regional Planning Council. “This is a chance to bring the world to Long Island … We have to think big.”

The council, whose members include elected officials and business leaders from across Suffolk and Nassau counties, voted 9-0 to name Midway Crossing a project of regional significance. The designation is expected to help raise funds from public and private sources, officials said.

Council chair John D. Cameron Jr., an engineer on the project, recused himself from the vote.

Hockey Hall of Famer Pat LaFontaine, a JLL consultant, told the council that the development “really elevates Long Island. It brings all of its greatest assets, its innovation, and it really brings it forward to the future.”

The Long Island Regional Planning Council on Thursday will host a presentation and panel discussion about the proposed Midway Crossing.

The Suffolk County Legislature in December threw its support behind the proposed development and approved an intermunicipal agreement with Islip to build it on the north side of the town-owned airport.

In a statement Wednesday, Islip Supervisor Angie Carpenter called Midway Crossing a “transformative project, which would not burden our property taxpayers, [but] would instead fully utilize our highly-educated workforce, provide high-paying jobs, and keep our young people on Long Island, long into the future.”

In a joint letter of support to Sen. Chuck Schumer in early May, eight town supervisors, including Carpenter, expressed support for the project, calling it “a regional and national attraction” for residents and visitors alike.

Aspects of the project include:

JLL officials say the project is transit-oriented, given its proximity to the airport and train station, and will also include electric vehicle charging stations and infrastructure for bicycles.

Trulson, responding to questions from council members, said the convention center would drive business at both the hotel and MacArthur, adding that one component could not succeed without the others. He referred to the possibility of “international” flights, but did not elaborate.

“This is about the future of Long Island,” Trulson said. “The future is now and this, we believe, is the right opportunity for Long Island to create something special.”

The proposal has captured the support of business and tourism leaders, who say the project would be transformational for the region. But it must secure approvals from a hodgepodge of local, state and federal agencies, including the Federal Aviation Administration. Planning and construction are expected to take 10 to 15 years.

The creation of the complex will add thousands of jobs to the region, including an estimated 4,300 in STEM, health care and medical research fields, which developers say they hope will entice younger people to stay on Long Island. During the construction of the project, developers plan to employ approximately 14,500 people.

“As Long Island and New York State lose people to other regions and baby boomers retire, this establishes an entirely new base of potential new jobs that will bring in people to get the high-paying jobs.”

Developers face hurdles in bringing the project to life. It’s unclear how it could be financed, although officials have said they’re eyeing federal stimulus money. Existing parking lots must be replaced and the Islip Town compost facility must be relocated.