You are here: Home / In the News / LIRPC Chairman, John Cameron Delivers Speech on Behalf of the Holocaust Memorial and Tolerance Center at the Long Island March Against Anti-Semitism

On January 12, 2020 more than 2500 Long Islanders from all backgrounds and faiths marched in solidarity against anti-Semitism and hate.  The march drew religious leaders, elected officials and community advocates from all around the region. Long Island Regional Planning Council Chair, John Cameron delivered a speech on behalf of the Holocaust Memorial and Tolerance Center. 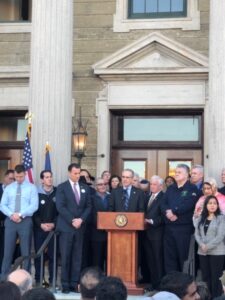 In December 2019, Nassau and Suffolk Counties formed a bi-county coalition that will develop a plan of action to combat and report acts of hate and bias incidents on Long Island. The coalition was developed in response to attacks in Brooklyn, Monsey, and Jersey City as well as incidents of ant-Semitic graffiti at the Holocaust Memorial and Tolerance Center of Nassau County and synagogues in Huntington.  The march marked one of the task force’s inaugural initiatives. 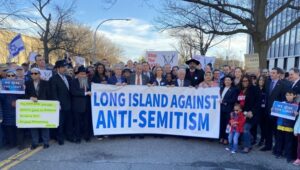