The New York and Connecticut Shellfish and Seaweed Aquaculture Viewer is a newly launched interactive online map to assist current or future aquaculture growers site new or expanded shellfish and seaweed operations.The viewer covers a wide area spanning New York and Connecticut’s coastal bays and harbors and all of the Long Island Sound. Shellfishing has a long, rich history in both states whereas seaweed cultivation is relatively new.  The powerful data driving the Aquaculture Viewer will help the shellfish industry flourish and seaweed aquaculture reach i its potential.

“Aquaculture is great for Long Island’s environment, food supply, and economy,” said John Cameron, Chairman of the Long Island Regional Planning Council (LIRPC), which is among the organizations that collaborated to launch the Aquaculture Viewer. “The planned cultivation and harvest of shellfish and seaweed will help improve our water quality, add an abundant and healthy food source, and generate economic opportunity for current and future aquaculture farmers.”

Shellfish feed on microalgae, which along with seaweed require and thrive on nitrogen, a nutrient found in overabundance in most of both state’s coastal waters. The excess nitrogen, however, is harmful for water quality, leading to excessive algal growth, low or no oxygen, and fish kills. The Aquaculture Viewer will aid a process known as bioextraction, which is the cultivation and harvest of shellfish and seaweed as a method to reduce this excessive nitrogen.

The Aquaculture Viewer provides detailed information on natural resources, environmental conditions, navigation, regulatory requirements, and potential use conflicts, which cumulatively aid in the identification of potential locations for shellfish and seaweed farms. The tool provides information to help shellfish and seaweed growers and other users of the coastal area assess conditions based on existing Connecticut, New York, and federal datasets and helps identify sites that are most suitable and pose the least risk for the long term. Permitting of sites by regulatory agencies is contingent on applicants’ access to the underwater lands for the purposes of commercial aquaculture for bioextraction.

Resource managers, program managers, and other stakeholders will use this tool for future decision-making regarding bioextraction and the role it can play in reducing nitrogen in New York’s and Connecticut’s marine waters. No previous experience with Geographic Information Systems (GIS) is needed to use the Aquaculture Viewer. 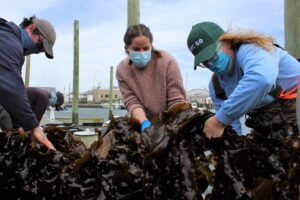 The Nutrient Bioextraction Initiative just completed a successful pilot project to grow sugar kelp, a brown seaweed, in several locations and measure its growth and capacity to absorb nutrients and other compounds. By absorbing nutrients, the kelp can help improve water quality in Long Island’s bays. As part of the project, the towns of Islip and Hempstead established seaweed ‘nurseries’ in their shellfish hatcheries to produce starter plants that were then transferred to three grow-out sites. Oyster growers in the Town of Islip  operated two of the sites. The third site was provided by the Town of Hempstead at its Angie M. Cullin Marina in Point Lookout. A second project is just starting where the harvested kelp will be evaluated as a potential fertilizer by Cornell Cooperative Extension researchers in Riverhead. Dried kelp and kelp extract will be tested for its potential value in the cultivation of two commercially important greenhouse and field crops.

The Aquaculture Viewer is available on the Long Island Sound Study website and can be accessed at https://longislandsoundstudy.net/nutrient-bioextraction-overview-development/new-york-and-connecticuts-shellfish-and-seaweed-aquaculture-gis-map-viewer.