You are here: Home / In the News / Town of Islip Approves Bay Shore Development Rezoning

The $165 million development project at the site of the former Touro
College site will be moving forward following a hearing.

A rendering of the 418-apartment complex which is planned for the former Touro College site at 1700 Union Boulevard. 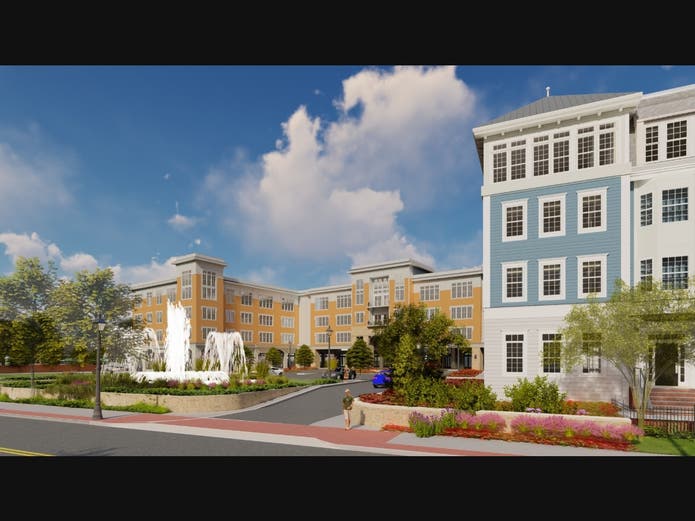 BAY SHORE, NY — The new development planned for the former Touro college site in Bay Shore will move forward after the Islip Town Board voted unanimously to approve the rezoning.

On Thursday, town officials hosted a public hearing with the developer, TRITEC Real Estate, regarding the potential 418-apartment complex at 1700 Union Boulevard at the corner of 4th Avenue.

Chris Kelly, of TRITEC, said the $165 million project is expected to create around 900 construction jobs and generate $13 million in discretionary income from future residents.

TRITEC recently worked on several downtown redevelopment projects across Long Island, including New Village in Patchogue and the Shipyard in Port Jefferson.

Bay Shore Superintendent of Schools Joseph Bond expressed his opposition to the project over the past 10 months.

“The Bay Shore School District is adamantly opposed to this project for a multitude of reasons, not the least of which being its potential to have a substantial negative financial impact on our schools,” Bond wrote in a message to the community last week. “Many in our community have expressed their strong opposition to this project and the impact it will have on not only our schools, but our community as well.”

However, Kelly said there has been a significant boost in the local economy because of those projects and presented studies that found that 80 percent of income generated from the residents of those developments is spent less than 10 miles from the home.

He said the project will be beneficial particularly for Bay Shore and Town of Islip.

“We found throughout other developments that residents go out and frequent local shops and that’s one of the things we really want,” he said.

Following the rezoning approval, TRITEC is now filing a site plan. If all moves forward, construction could possibly begin by 2021.

“We submitted a lot of economic impact studies, specifically two studies done on downtown redevelopments commissioned by the Long Island Regional Planning Council and done by Forward Planning, shows the economic impacts of the revitalization of both Patchogue and Farmingdale,” Kelly said. “They speak to the results we anticipate in Bay Shore as well.”

For example, a single point of entry has been set up so that if a contractor were to enter, they could be met with someone to take their temperature and certify that they have no symptoms. In addition, the company has developed a special contact tracing process to let workers know when they are getting too close to someone and monitors how long they were around a person if there is a positive COVID-19 case. Hand washing stations and hand sanitizing stations have also been installed. In addition, mask rules have been put in place.

“TRITEC is a Long Island company so we have the best interest of the Long Island community and the communities we work in, at heart,” Kelly said. “If you visit our other projects, you’ll see the level of quality that we build to. We act with integrity, we do what we say we’re going to do and we try to, throughout our project, create a symbiotic relationship between the community and our project.”