You are here: Home / Economic Development / LIRPC commissions economic study of Patchogue’s redevelopment
Read the Full Study
The Downtown Patchogue Redevelopment effort has been one of Long Island’s foremost community improvement success stories. The transformation — in both the commercial and residential sectors – has helped make it both a popular destination for visitors and an attractive place to live. 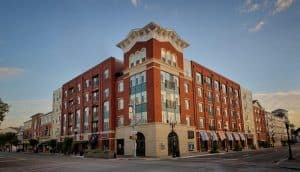 The LIRPC has designated Downtown Patchogue as a Project of Regional Significance and it has been recognized by Suffolk County, the Long Island Index, the Long Island Housing Partnership, Sustainable Long Island, the Regional Planning Association, and Vision of Long Island. The keys to Patchogue’s success include great planning, sufficient funding and private investment. From 2004 through 2016, Patchogue has received an estimated $55 million dollars of federal, state and county grants for infrastructure, development and building improvements. These grants have helped to bring an estimated $400 million dollars of private investment to the Village. Businesses have continued to flock to the Village and there are many new projects on the horizon.

The LIRPC commissioned a study to measure and analyze the economic impacts associated with the redevelopment of the village to better quantify the wide-reaching impacts. Job creation, local spending, tax generation and property values are among the areas on which the study reports. The downtown’s redevelopment is recognized as a model for transit-oriented development and a success story for Smart Growth on Long Island.

In particular, the analysis includes: